Most of the large stardust grains are still only a few micrometers in size. Determining the trace element isotopic composition thus requries a very sensitive technique. In addition, the ideal technique should be able to determine between different isobars, i.e., be able to analyze isotopes of different elements that have the same mass, e.g., 58Fe and 58Ni, simultaneously.

Resonance ionization mass spectrometry (RIMS) is an ideal technique to analyze such particles. The following animation shows schematics on how RIMS works.

The advantage of RIMS is the ionization of neutral atoms by tunable, resonant lasers. First of all this process is highly effective since almost all of the atoms that come off in the removal event are neutrals. Further, resonance ionization means that multiple lasers are tuned to stepwise and resonantly excite an atom until it is singly ionized. The figure below for example shows an example for the ionization of titanium. 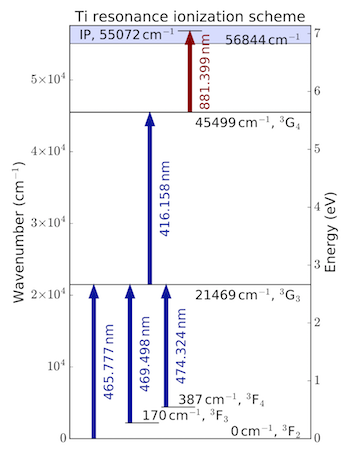 This ionization scheme is taken from Trappitsch et al. (2018). Shown are mutliple transitions for titanium, all of which are highly selective and effective for only this specific element, here titanium. Thus, other elements with potentially overlapping isobars are not ionized.

The figure below shows a mass spectrum recorded by RIMS for the quasi-simultaneous analysis of iron and nickel.

While iron and nickel have an overlapping isobar at mass 58, the ionization of nickel was delayed by several hundred nanoseconds with respect to the ionization of nickel. In the time-of-flight mass analyzer this separation resulted in a separation of these two identical masses allowing the simultaneous detection of 58Fe and 58Ni. RIMS thus, compared to other techniques, allows us to analyze elements with inherent isobaric overlaps simultaneously for all isotopes. 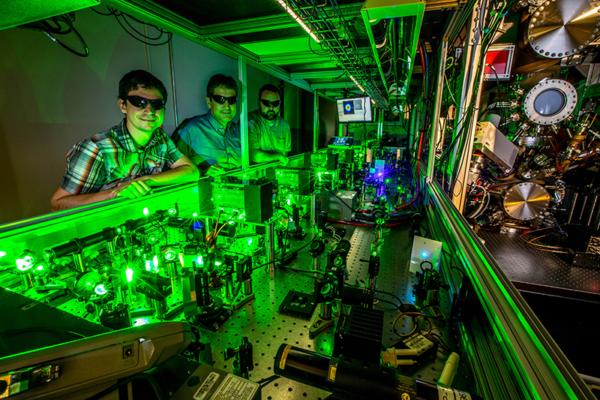 The image above shows the LION instrument. The mass spectrometer can be seen on the right side, however, the reflectron (in this setup the top of the instrument) is outside the field of view. The center and left part shows the six tunable Ti:Sapphire lasers which allow the simultaneous ionization of various different elements.